Okefenokee National Wildlife Refuge is located in South Georgia, near the border with Florida. Recently my friend and I visited to paddle around the swamp and drive around swamp island  and walk the Chesser Island boardwalk to try and see some wildlife. The refuge is 630 square miles and encompasses nearly all of the swamp and was designated as a refuge in 1937 by President Roosevelt. It is one of the best preserved freshwater ecosystems in the world and some of the swamp is a national wilderness area. In the western part of the refuge there are is a cypress swamp but in the east it opens up to a prairie land. If you rent a kayak from Okefenokee adventures its is a short trip to see both regions of the swamp. The swamp is births the St. Marys river and the Suwannee river. Okefenokee is a native american word which means land of trembling earth. Most of the “solid” ground is actually peat that is floating. This floating peat is called batteries. Overtime the batteries grow larger and area able to support trees and large animals. The swamp was formed in a saucer shaped depression that used to be a part of the ocean floor.

Many people do not realize that fire plays an important role in the swamp. Without fire the swamp would simple become a hardwood forest. Today prescribed burns reduce the amount of fuel available fire fires. In areas where there is a natural fire regime and humans stop these fires there is a build up of organic materiel. When a fire does break out because there is more fuel, the fire burns hotter than it normally would, damaging the seed bank in the soil. This can permanently damage the ecosystem. One of the most recent fires in Okefenokee occurred in 2011 in the Honey Prairie which burned down the former boardwalk on Chester Island. This was not due to a build up of fuel however, as the parks service lets fires that were caused by lighting burn which maintaining the safety of people and structures inside the park. The new boardwalk has a built in sprinkler system. Over the 7,000 years that the swamp has existed fires occur an average of every 20 years. Currently the swamp is regenerating from the fire. Notable from the young pond cypress trees (Taxodium ascendens) that are sprouting. Trees that sprout from old stumps are common and actually grow faster than seed generated trees. This stump sprouts are called coppices. 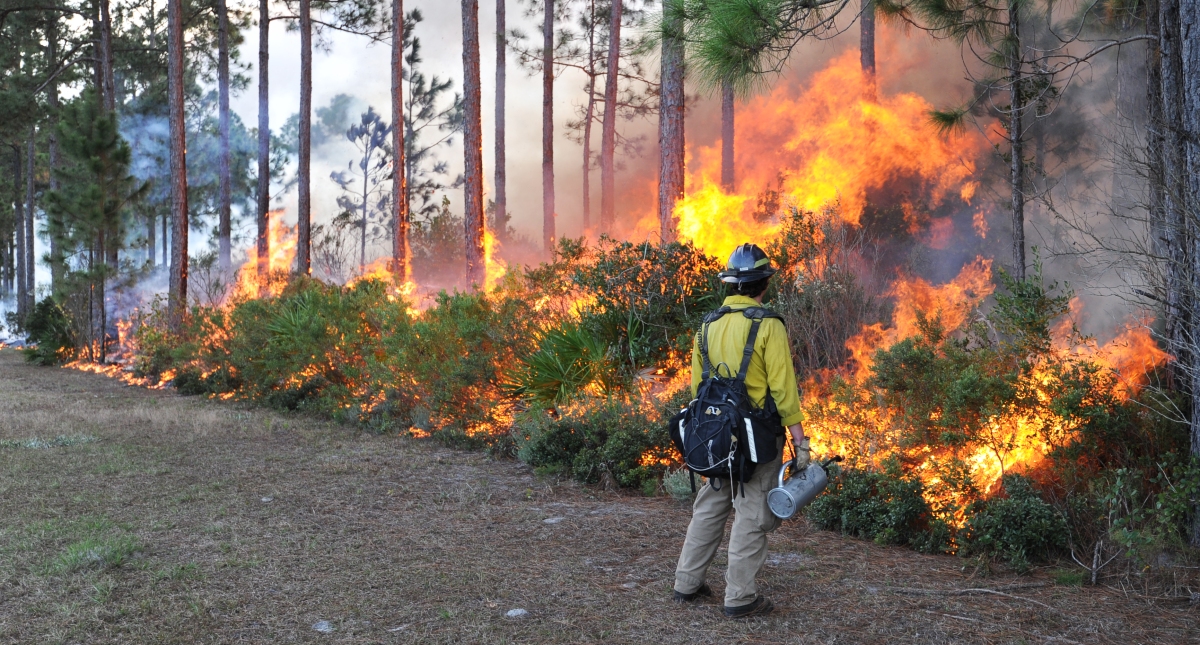 Longleaf pines (Pinus palustris) are also found in the refuge. They have a very open understory and fore is often used as a tool to maintain that understory. These slow growing pines once covered over 90 million acres of the Southeast United States. Today only 3 percent, or 3 million acres, of these forest remain yet they are very diverse ecosystems and support many endangered species. The forests were removed and replaced with fast growing pines for timber production. In fact, only 12,000 acres are old growth pine and those acres are often highly fragmented. This contributed to the decline of the ivory-billed woodpecker (Campephilus principalis), which may or may not be extinct depending on how you feel about some footage taken in a Louisianian swamp. The best places to see these forests in the refuge are on the Swamp Island Drive and Stephen C. Foster State Park. The pines often have saw palmettos (Serenoa repens) growing in the understory which makes for a striking looking forest. The palmettos are used by over 100 different species for foraging, nesting, and protective cover. They produce berries which are consumed by raccoons (Procyon lotor), gopher tortoises (Gopherus polyphemus), black bears (Ursus americanus), and many species of birds.

The most iconic resident of the swamp is the American Alligator (Alligator mississippiensis). I was fortunate enough to only see a young one. They prefer swamps as in clam water they can keep their snouts level to breathe but in rougher water they have to keep their snout at a steep angle to breathe which makes it really hard to swim. Courtship starts in April and they mate in May. Males bellow to attract females, in fact American Alligators are the most vocal of all crocodilians. Eggs are then laid in June or July. They lay between 20 and 40 eggs. Two months later the young hatch out. 80 percent of the young fall victim to raccoons and birds. The young stay with the mother until they are a year old. like bears, mother alligators are very protective so it is best to keep your distance. However alligators are typically not aggressive unless people feed them because they they associate humans with food. The sex of the offspring is determined by the temperature, with warmer temperatures, above 90 degrees Fahrenheit, producing males. This has led to concerns over climate change that there will be an imbalance in the sex ratio in the population. Gators often wiggle themselves into the peat and wait there for prey to come by. Females on average are about 10 feet long while males are between 13 to 15 feet long. Young gator have yellow strips on their tails. 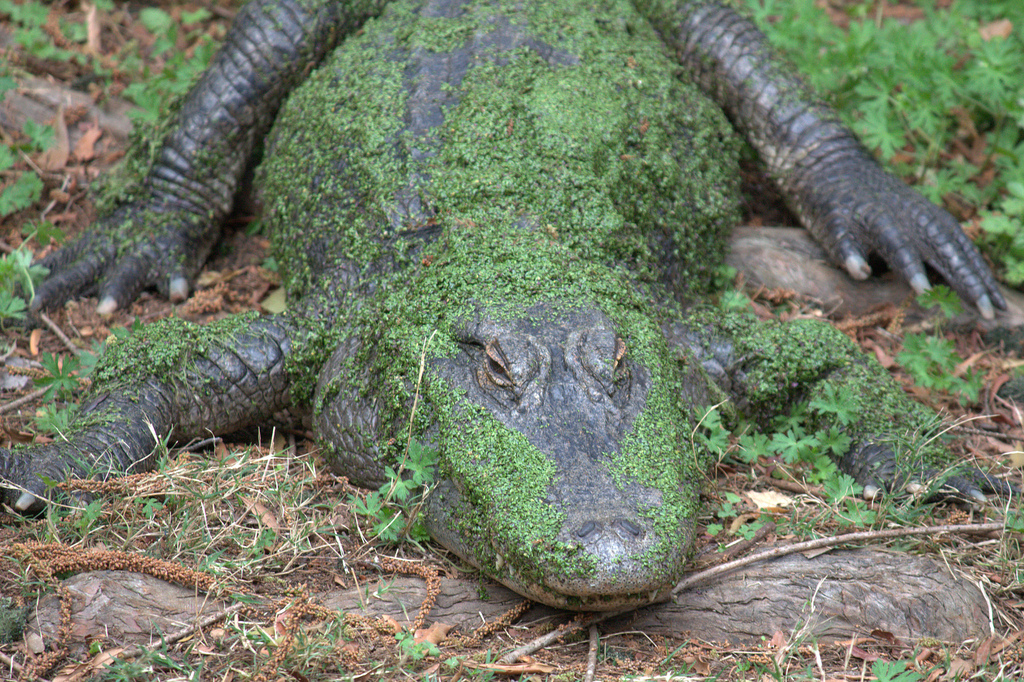 Sand hill cranes (Grus canadensis) also make their home in the swamp. I saw a pair of them. They are yearound residents in Florida and migrate between parts of the Southern US and the Arctic circle. The birds mate for life and raise a clutch of chicks each year which typically has between one to three chicks in it. These chicks leave their nest after 8 hours and can even swim at that point. They often dance in the courting process making them a favorite species of many including Aldo Leopold. They can be seen from November to February in the swamp as they are migrating north. They stop in the swamp to fuel up on crustaceans and the rhizomes of red-rooted plants. They then fly north to their breeding grounds. Cranes that breed in the arctic are smaller and considered their own subspecies.They are 4 feet tall and wight up to 10 pounds! While their populations are stable they are considered vulnerable because they depend so heavily on stopover grounds during migration. In fact it is estimated that 80 percent of birds use this one stopover ground in Nebraska that is only 75 miles.

The water itself was tea colored. It seemed to be shallow but because we hadn’t seen many alligators I was not getting out of my boat. The water is that color because in a swamp organic material settles  and forms peat instead of decomposing. This allows compounds like tannins and humates to build up in the water. This also means that most of the swamp is actually a bog because of the layer of peat and the area is fed by rainfall. I also saw American bittern (Botaurus lentiginosus), a bobcat (Lynx rufus), raccoons, and a marsh rabbit (Sylvilagus palustris). Other species of note that I did not see include the gopher tortoise, black bears, red-cockaded woodpecker (Leuconotopicus borealis), Florida Softshell Turtles (Apalone ferox), and eastern indigo snake (Drymarchon couperi) (North America’s longest snake- 8.5 feet!).