Viruses are infectious particles made of nucleic acid encased in a protective protein coat and, sometimes, a membranous envelope. The genome of viruses may consist of double-stranded DNA, single-stranded DNA, double-stranded RNA, or single-stranded RNA, depending on the kind of virus. The viral genome is usually organized as a single linear or circular molecule of nucleic acid. The genome is encased in a protein shell called a capsid which is derived from the host cell. The most complex capsids are found in viruses that infect bacteria, called bacteriophages or phages. A virus has a genome but can reproduce only within a host cell. Dr. Beijerinck used the sap from one generation of infected plants to infect the second generation of plants that could, in turn, infect future generations. Dr. Beijerinck determined that the pathogen could reproduce only in the host, could not be cultivated on nutrient media, and was not killed by alcohol which generally kills bacteria. 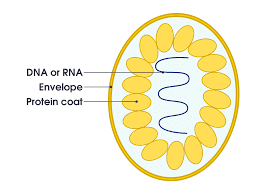 An isolated virus is unable to reproduce—or do anything else, except infect an appropriate host. This is because viruses lack the enzymes for metabolism and the ribosomes for protein synthesis. Each type of virus can infect and parasitize only a limited range of host cells, called its host range. Viruses identify host cells by a “lock and key” fit between proteins on the outside of the virus and specific receptor molecules on the host’s surface. Most viruses of eukaryotes attack specific tissues. Most DNA viruses use the DNA polymerases of the host cell to synthesize new genomes along the templates provided by the viral DNA.