The San Marcos River is a spring-fed river located between Austin, Texas and San Antonio, Texas. The San Marcos River is only 75 miles long and eventually joins with the Guadalupe River. At the headwaters the river is crystal clear, thanks to the headwaters being spring fed. It is the crown jewel of Texas State University in San Marcos, Texas and is a popular site for tubing but few know about the interesting animals that live in the river. In fact, it’s considered one of the most diverse aquatic habitats in the southwestern United States. 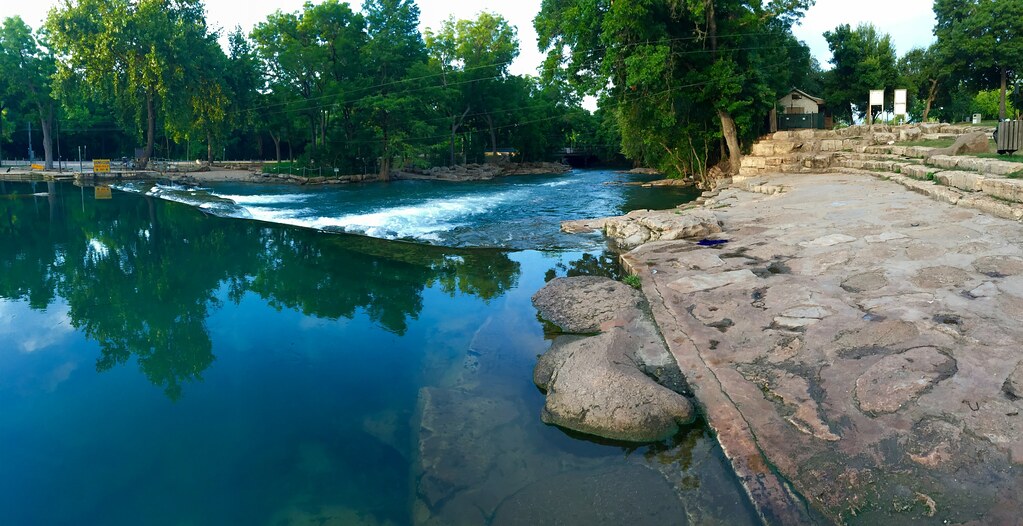 It’s home to an endemic species of river grass, called Texas Wild Rice (Zizania texana). Other inhabitants of the river include freshwater mussels (including the Golden Orb (Quadrula aurea)), turtles, prawns, Guadalupe bass (Micropterus treculii), and suckermouth catfish (Hypostomus plecostomus). The later as nonnatives, that were accidentally released into the river by humans. The river is also home to the endangered foundation darter (Etheostoma fonticola). It formerly was home to the endangered.  San Marcos Gambusia (Gambusia georgei) but the species hasn’t been seen in recent years. There are a few other endangered species you can read about here.

The headwaters of the river come from Spring Lake in San Marcos, which was originally created by a dam. You can watch the lake turn into the river from the patio at Saltgrass Steak house. The lake is fed by the Edwards Aquifer. You can actually dive in the lake, or take a glass-bottom boat  (at the Meadows Center) and see the aquifer producing water. If you park in this area and access the river via the culvert by the Freeman Aquatic Center the island is actually a great source of arrowheads after a large rain event.

The Meadows Center is located where a former amusement park was located called Aquarena Springs. The park was home to “real” mermaids and a diving pig. Today you can still find pony beads from the former clown act and bottle caps from an act the mermaids did in which they drank coke underwater. Technically the beads and caps are artifacts so you are not supposed to take them but that doesn’t stop people.

Water privatization, in principle, is great. The idea is that corporations have the financial resources that governments do not to provide the people with clean water. In addition, they can afford the big upfront costs of creating a water system. However, when put into practice privatization fails. A water system requires huge and ongoing infrastructure investments. Corporations have cut corners on these which leads to a shortage of access. Privatization, in fact, has a 34 percent failure rate. Because the system costs so many people often are forced to overpay for their water.

The film Flow documented people in African who could not afford the privatized water. Instead, they drank from the river which resulted in people dying from waterborne illnesses. The companies, when questioned, insisted that the people could afford the water. In addition, the companies also cemented old wells and prevented the local people from using their old, and free methods of accessing clean fresh water. The only upside to privatization is that it is easy to solve; don’t allow privatization to happen. Poor nations will need aid though, to help ensure their people have clean fresh water, but this is part of a continuing effort, as there are many charities focused solely on this issue.

END_OF_DOCUMENT_TOKEN_TO_BE_REPLACED

The purpose of doing a wetland delineation is to establish the wetland boundary. This can be done either using the soil or the vegetation in that area. The US Army Corps of Engineers manual on Wetlands Delineation is considered the standard although there are different supplemental manuals depending the region that you are in. It is mandatory to use the manual to identify and delineate wetlands that could be subject to regulation under Section 404 of the Clean water act. While mudflats are protected under section 404, the manual only deals with vegetated sites, aka wetlands. Both the list of plants and soils listed in the manual are considered obsolete. A newer list of plants is available here and a newer list of soils is available here.

In order to defer something as a wetland it has to meet three key criteria; saturated soils from a permanent or periodic inundation of groundwater, vegetation adapted for life in saturated soils, and the presence of “normal circumstances”. More specifically soil must be classified as hydric and the mean water depth is less than 6.6 feet deep. Wetlands may be surrounded by either deepwater aquatic habitats or nonwetlands. See the Army Corp manual on pages 10 and 11 for more specific definitions of these habitat types.

END_OF_DOCUMENT_TOKEN_TO_BE_REPLACED

Ichthyology is the study of fish which includes both saltwater fishes and freshwater fish. Freshwater fish are endothermic vertebrates meaning their temperature is regulated by the environment and they have a backbone. They breathe via gills and move with fins. All species have their own range and is typically limited by factors like prey, cover, suitable water temperatures, and dissolved oxygen levels. Generally, certain types of fish are likely to be found in certain habitat types. Darters and shiners, for example, prefer swift following stream with riffles while sunfish, bass, catfish, and suckers like prefer pools. Gar, bowfin, and perch prefer backwater as it has low dissolved oxygen. Fish can be found at all levels of the food chain from bottom feeders to apex predators. Fish can also be broken down into groups based on their tolerance to pollution. The amount of pollution tolerant fish, immediate and pollution sensitive fish can be used to determine the water quality in an area.

Biologists commonly use two methods to study fish; electroshocking and seining. Here I will discuss seine for riverine species. Larger seines are used in marine environments for more commercial purposes. Seining involves taking a vertical net, that has weights on the bottom and floats on the top and dragging it through the water. The net is then flip upward, trapping any fish that were in the area. You can easily make your own seine with netting and plywood. To seine properly it is best to have at least three people, tow to drag the net and one to pull fish out of the net and place them in a bucket to identify species. Electroshocking or backpack shocking is way more fun and productive than seining, however, you do need a permit to do so. If you have the necessary permits someone puts on the shocking device which is similar to a backpack. The device holds a car battery so it is very heavy but once the battery is placed in the backpack the backpack it typically waterproof. The backpack has a tail and a wand. When turned on there is an electrical field between the two elements. The stunned fish float up to the surface and the net holders scoop them up. The fish often recover very quickly and you have to act fast to scoop them up. For some reasons, surface area I think, larger fish are more impacted by being shocked. It is important to wear waders while shocking and not touch the water to protect yourself.

Once you have a fish in hand it is important to know what certain terms mean to help identity it. There are 16 major families of freshwater fish. In the next Taxonomy Tuesday post, I will be going to the families.

The following was my environmental studies senior thesis.

Storm water runoff from agricultural areas carries excess nutrients with it, which leads to dead zones in nearby lakes. Lake Champlain is the sixth largest lake in the United States, and is facing issues related to excess nutrients from farms. Research related to farms has focused on runoff related to manure spread on fields. One area not previously addressed is manure management on farms. There are two main types of manure pit styles on dairy farms; enclosed and, unenclosed. Three farms of each of these types were analyzed for nutrient runoff during storm events. Four key factors linked to nutrient runoff were analyzed through field sampling; phosphorus, dissolved oxygen, nitrate, and ammonium. The study took place in the Lamoille River Watershed in Vermont which feeds into Lake Champlain. Baseline data was collected before storms and samples were also collected after storms. The goal of this study was to identify a manure pit management style that minimizes nutrient runoff. While the data indicated that a manure pit that lacked a confining wall impacted phosphorus, ammonium, and nitrate, there was no significant impact on dissolved oxygen from such pits. However, manure pits had relativity low impact on the streams overall; other more important factors may be soil erosion, manure spreading, and septic tanks.

END_OF_DOCUMENT_TOKEN_TO_BE_REPLACED

This post serves to give basic information on wetlands so that in future posts I will be able to build on this knowledge as I don’t want to assume what my readers do and do not know. In the simplest terms, a wetland is a place where plants grow in soil that is soaked with water including; swamps, bogs, marshes, and mangroves. Wetlands are often small and surrounded by other biomes. Wetlands have the 2nd highest species diversity of terrestrial ecosystems, after tropical rainforests. Some of the largest wetlands worldwide are the Huson Bay Lowlands, Everglades, Okavango Delta, Nile Delta, Sundarbans, and the Pantanal. Ironically, wetlands in the past had been viewed very negatively, therefore, they were often drained for farmland. Today we recognize the value of wetlands especially when it comes to soil filtration and storm protection. Wetland delineation is becoming more common as a part of environmental assessments in which soil and plants are measured to try and reduce the number of wetlands disturbed, later posts will focus on this process.

Some wetlands are seasonal and only occur when there are huge amounts of rainfall. Bogs are a type of wetland that relies almost entirely on rain as their source of water. rainwater also tends to be acidic and poor in nutrients. The result of this is that bogs are fairly infertile and plant growth takes a very long time. Bogs are associated with colder regions and sphagnum moss. Because bogs are such a poor environment to live in they develop layers and layers of undecomposed plant material which becomes what we call peat. As it can hold lots of water and energy-rich it is used for gardening and as a heat source. Over millions of years, peat can become coal as well. A great way to remember that bogs are an unproductive environment is to remember that in Siberia we have found wooly mammoths (Mammuthus primigenius) so well preserved we might be able to clone them. The same would not be true if the mammoth died in a productive ecosystem as it would have been recycled back into the system. Carnivorous plants are also common in bogs as they don’t have to rely on nutrients for the soil. The most common types include sundews (Drosera), pitcher plants, a Venus fly -traps (Dionaea muscipula). Thanks to increased demand for them as houseplants Venus fly-traps are facing population declines although removing a wild plant is now a felony.