*disclaimer*This post is based on a paper I wrote for an animal nutrition class, so it’s a bit long.

Parrots are primarily found in the tropics and often are associated with tropical paradise imagery. There are over 350 species in the order Psittaciformes, which are commonly referred to as parrots. This order is divided into 2 families (Koutsos 2001), Cacatuidae and Psittacidae. Cacatuidae contains cockatoos, cockatiels and corellas. Psittacidae contains lores, lorikeets, parrots, macaws, parakeets, rosellas, and love birds. Psittaciformes are some of the most common birds kept in captivity due to their high level of intelligence and distinctive physical form. A large number of zoos have parrot collections, and at large pet store retailers they are available as companion animals. Unlike other birds, they are not used for commercial use of their eggs, meat, or feathers. Therefore only the maintenance values are important in the feed formulation of these birds.

All of these parrots have specialized nutritional needs. As a result, most common cause of vet visits is improper diet (Torregrossa 2005). Therefore this paper will focus on the basic nutritional needs of parrots. Similar to horses, these diets have become adapted to human needs, and thus is not reflective of parrots in the wild. In the wild parrots eat roughly 70 percent seeds (Gilardi 2012) but their diets range from nectarivores to granivores (Matson 2006). Renton (2001) also observed a high flexibility in the diet of wild parrots. Pullianen (1972) found that birds do not select the foods based on their nutritional needs. Because these diets are so varied it is hard to produce a feed that meets the nutritional needs of all parrots.

For this reason commercial feeds have widely changed over time, and have been based, to a certain extent, on what was most convenient for humans. For example, some birds may be provided with fresh fruit, but it is fruit that is not native to their originating area. Because birds are often cheaper to purchase than other animals, such as mammals, there is not as much research on their nutritional needs. In addition, they are not used for commercial purposes, and their use is limited to zoos and companion animals.

Birds are modified monogastrics. They have a crop which serves to store excess food. This is an adaptation to predation as it allows for storage of rapidly consumed food. The stomachs have two chambers; the proventriculus and gizzard. The proventriculus is the true stomach and contains digestive enzymes. The gizzard is a strong muscular sac that is lined with what are called gizzard teeth. These hard structures help to break down the food mechanically. Birds also have two cecaes where the small intestines become the large intestines. These allow for microbial digestion of food. Lastly instead of having a rectum birds have a common opening called a cloaca, which is used for excretion of all wastes, and reproduction. The digestive system of parrots has not been specifically studied, as with most aspects of their nutrition. Recent studies have looked at vitamins. 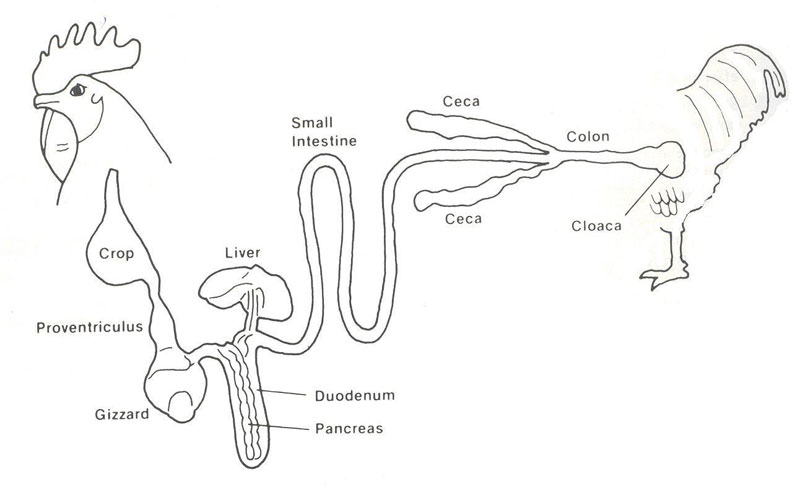 Vitamin A is a fat soluble vitamin which means that it is stored in the body and therefore can have toxic effects as well as deficiency. The amount of vitamin A circulating varies by subfamily and genera (Torregrossa 2005). It is hard to make generalizations about vitamin requirements due to this variability. However, the signs of deficiency are clear. Deficiency causes behavioral changes like feather picking (Torregrossa 2005). It can also cause physical changes like anorexia, increased rate of infection, and poor conditioning (Lowenstine 1986).

Vitamin A levels are measured by using retinol, which is the animal form of vitamin A. Retinol is typically measured using liver samples. While it is easy to obtain these samples, it doesn’t tell you how much of the vitamin is in the body reserves. Between species of and similar feed developed hypovitaminosis. This means that they were vitamin A deficient. In other species toxicity was a more important issue that deficiency. For example, in cockatiels- adults fed 100,000 IU within 3 months got toxicity but those feed 0 IU in 2 years didn’t develop deficiency (Matson 2006).

Vitamin E, also a fat soluble vitamin, is the only other vitamin that has been widely studied in Psittaciformes. It can be stored in the body but fluctuates with intake. Again, it also varied by subfamily and genera (Torregrossa 2005). Vitamin E is measured by using alpha and beta tocopherol which are associated with vitamin E activity. Pesquet parrots are unique in their diet and therefore there has been specific research on their nutritional needs. Levels of vitamin E where low in Pesquet parrots which in the wild feed only on the pulp of figs (Pryor 2001). It is not that they are deficient, in the wild they consume low amounts of vitamin E and so have become adapted to that reduced intake. In contrast, hyacinth macaws, which are granivores have a high level of vitamin E activity (Pryor 2001). Granivores have a seed based diet.

In addition to vitamins, all animals require proteins, as they are the building blocks of life. From observational studies the protein intake of wild parrots is well established. Crude protein levels was 21.93percent for seeds, 9.67percent for whole fruit, and 8.05percent for fruit pulp (Gilardi 2012). Regardless of the crude protein level all birds, including Psittaciformes, need 12 essential amino acids (Matson 2006). The requirements are highest for growing chicks and egg laying females (Matson 2006), as well as for molting birds (Koutsos 2001). For growing cockatiel chicks this requirement is 20percent crude protein. For adults at maintenance the requirement is 13- 17percent. Molting birds require more protein as the major component of feathers is protein. In budgerigers, feathers are 5.7percent dry mass but contain 22percent of the body’s protein (Kamphues 1997).

Due to this variety of factors, the protein requirements vary by species significantly. African grey parrots need 10-15 percent protein for maintenance (Matson 2006). Similarly, cockatiels need 11 percent protein for maintenance (Matson 2006). While rainbow lorikeets need only 2.9 percent because of a diet of nectar (Koutsos 2001). In order for a particular bird to be at maintenance, the intake of protein needs to match the obligatory loses (Klasing 2001). Obligatory loses are the loses in excretion of waste. The requirements for maintenance also increase as body size increases (Klasing 1998). Too much protein can be toxic to birds, birds fed 70 percent crude protein had liver damage (Koutsos 2001), therefore it is important to understand the maintenance level and not greatly exceed it.

Lipids are another component of feed that is important to the health of Psittaciformes. Observational studies have also been done to determine the amount of fat in wild parrot diets. Wild parrots diets had crude fat levels of 22.86percent for seeds, 9.87percent for whole fruit, 3.91percent for fruit pulp (Gilardi 2012). Because of the lack of research on captive birds the guidelines for poultry are used. In these guidelines 1percent of the diet should be linoleic acid, and 4-5 percent of the feed should be lipids (Matson 2006). Judging from the problem of obesity in parrots, most feeds have the maintenance level of lipids needed (Werquin 2005). A study of 30 commercial seed mixes for fat composition found the average was 8.6 percent but for dehulled mixtures was as high at 31.7 percent (Werquin 2005). The hull mostly contains indigestible carbohydrates. The lipid content in dehulled feeds, greatly exceeds the maximum amount of lipid content found in wild diets of 22.86 percent.

Minerals are a key component in the feed of all animals. With proper mineral intake animals develop deficiencies. Calcium is the most important mineral from birds, as it is needed to make eggshells and develop their skeletons (Matson 2006). As birds grow more bone is formed, in order to increase structural stability as they age. Particularly in birds the egg quality is reduced and they are more prone to breakage or introduction of microbes. Gilardi (2012) showed that wild parrots do not selected food based on the minerals in the food therefore it is important to provide the birds with the amount of minerals that they need.

No direct research has been done on the calcium requirements of Psittaciformes. Therefore, chicken feed requirement is used (Matson 2006). Growth chickens need 1.0 percent of their feed to be some form of calcium (Koutsos 2001). Egg laying hens need 3.3 percent calcium (Koutsos 2001). To further complicate the mineral requirements of parrots, deficiency in calcium can occur if there is too little vitamin D or too much phosphorus. The requirement levels for vitamin D and phosphorus have not been studied. Little is known about minerals besides calcium. However, it has been documented that in high levels zinc can cause toxicity (Howard 1992).

The last major component of feed that is considered in formulation is energy. Typically energy is in feeds in the form of carbohydrates. The basal metabolic rate of parrots depends on the climate of origin (Koutsos 2001). Tropical species typically have 73.6 kcal per kg of body weight per day requirement. Temperate species have 21 percent higher requirements (Koutsos 2001). There is little data associated with the energy requirements for parrots, and for a good reason. Birds eat to a level that fulfills their energy expenditure (Koutsos 2001), therefore other aspects of the feed are more important. In captivity birds are feed to appetite, so if the energy needs of the feed are not at an adequate level the palatability of the food needs to be increased.

There are many aspects that go into the feed of an animal, parrots included. Mostly vitamins, minerals, fats, proteins, and energy are investigated. For parrots, vitamins A and E have been fairly well studied in captivity. Lipids and proteins have been studied in the wild but not in captive species. For these reasons, the recommended levels for poultry is used in their feed. Lastly, minerals are not well studied at all and future development will aid in the proper care of these birds.