Ichthyology is the study of fish which includes both saltwater fishes and freshwater fish. Freshwater fish are endothermic vertebrates meaning their temperature is regulated by the environment and they have a backbone. They breathe via gills and move with fins. All species have their own range and is typically limited by factors like prey, cover, suitable water temperatures, and dissolved oxygen levels. Generally, certain types of fish are likely to be found in certain habitat types. Darters and shiners, for example, prefer swift following stream with riffles while sunfish, bass, catfish, and suckers like prefer pools. Gar, bowfin, and perch prefer backwater as it has low dissolved oxygen. Fish can be found at all levels of the food chain from bottom feeders to apex predators. Fish can also be broken down into groups based on their tolerance to pollution. The amount of pollution tolerant fish, immediate and pollution sensitive fish can be used to determine the water quality in an area.

Biologists commonly use two methods to study fish; electroshocking and seining. Here I will discuss seine for riverine species. Larger seines are used in marine environments for more commercial purposes. Seining involves taking a vertical net, that has weights on the bottom and floats on the top and dragging it through the water. The net is then flip upward, trapping any fish that were in the area. You can easily make your own seine with netting and plywood. To seine properly it is best to have at least three people, tow to drag the net and one to pull fish out of the net and place them in a bucket to identify species. Electroshocking or backpack shocking is way more fun and productive than seining, however, you do need a permit to do so. If you have the necessary permits someone puts on the shocking device which is similar to a backpack. The device holds a car battery so it is very heavy but once the battery is placed in the backpack the backpack it typically waterproof. The backpack has a tail and a wand. When turned on there is an electrical field between the two elements. The stunned fish float up to the surface and the net holders scoop them up. The fish often recover very quickly and you have to act fast to scoop them up. For some reasons, surface area I think, larger fish are more impacted by being shocked. It is important to wear waders while shocking and not touch the water to protect yourself. 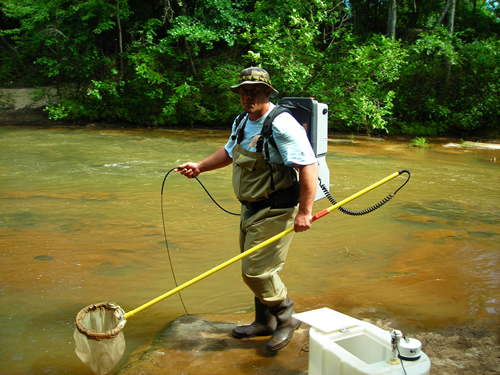 Once you have a fish in hand it is important to know what certain terms mean to help identity it. There are 16 major families of freshwater fish. In the next Taxonomy Tuesday post, I will be going to the families.